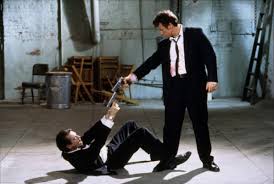 Quentin Tarentino’s first film hit cinema screens as if it was shot out of a gun. No wonder it was so violent. All that energy and talent, all contained in one place. Watching RESERVOIR DOGS was like being hit by a tsunami. You had no choice but to go with the flow. Unlike a tsunami, you could decide later if it was worth the ride.

With RESERVOIR DOGS, Tarentino put the film world on notice. “This is how I’m going to make movies. I’m full of ideas, I love action, I’ll take chances.” About the only ones who could really object were those who liked their movies a little, well…..less self-conscious, or those who really don’t like movies at all.

Roger Ebert wrote once about a screening that he attended of Roman Polanski’s BITTER MOON that was populated by the usual suspects of fellow movie critics and other industry types. After the screening, none of them spoke too fondly of the film, and the reviews that followed were mostly negative. But Ebert noted that during the screening itself…… you could hear a pin drop. Polanski can do that to you. I have to admit that after my first viewing, my assessment was also rather……complex. I felt conflicted about endorsing a movie about a complete asshole (Peter Coyote) who uses and abuses his lover (Emmanuelle Seigner, Polanski’s wife, no less) but gets his comeuppance as revealed in flashbacks as their story is told to casual acquaintances (Hugh Grant and Kristin Scott-Thomas, no less) while sharing a cruise together.

BITTER MOON is not an easy film to warm up to. But after REPULSION, THE TENANT, DEATH OF A MAIDEN and just about everything else Polanski has done, what should we expect? With consummate skill and a signature style, Polanski challenges our very perceptions of moral behavior. That is not always a very comfortable place to be. But isn’t that sometimes where we want our art to take us? 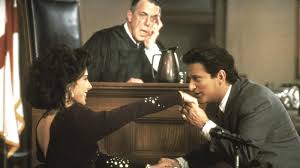 By 1992, it seemed too much to ask to see a well-constructed, original comedy that could deliver the laughs without insulting our intelligence and without falling apart by the end. That’s what makes MY COUSIN VINNY so special. And how good it was to see Joe Pesci get a quality role and not get type-cast so soon after his Oscar-winning role in GOODFELLAS. Marisa Tomei got hers as well, in a film as good as those we had come to expect from the 30’s and 40’s.

Robert Altman always said that he made movies the same way throughout his career. Occasionally, they would click with audiences and occasionally with the critics. And sometimes they didn’t. After his early successes, mostly they didn’t. Then came THE PLAYER, with a terrific screenplay by Micheal Tolkin (from his novel). Altman was back in favor. His familiar use of scattershot dialogue and off-center humor served the story well. Tim Robbins found his inner asshole as the Hollywood studio executive who has to get away with murder in order to keep up the good life. Does he succeed? A brief look at Altman’s past films might provide the clues. 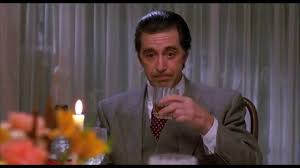 SCENT OF A WOMAN (Martin Brest)

Another actor-driven, performance-dominated film that makes one wonder what it would be like without its dynamo in the center. The nucleus in this one is Al Pacino, who can play anything. He happens to be blind in this one, and we can’t keep our eyes off of him.