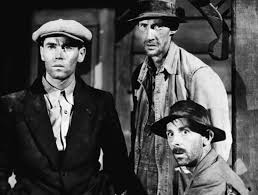 THE GRAPES OF WRATH (John Ford)

It has been noted that it seems odd that two staunch conservatives like producer Darryl Zanuck and director John Ford should collaborate on an American story of social injustice and economic inequality. But America was not as polarized in 1940 as it is today, and John Steinbeck’s now-classic portrayal of farmers in the dust bowl trying to survive the ravages of nature and the cruel realities of bank repossession transcended any political considerations of the day. Back then it wasn’t necessary to take a political position in order to see the obvious need for unions to protect those on the bottom of the supply chain; those workers who pick our peaches and clean our toilets. Those who needed protection from unscrupulous owners and enterprising “businessmen”. In 1940, most Americans when shown injustices, wanted to correct them. And they believed that it was not only the right thing to do, but the American thing to do so. “We are the people”, says Ma Joad at the conclusion of THE GRAPES OF WRATH.

For John Steinbeck, this was a human story first, and it is that humanity that is so beautifully expressed in this equally classic film. John Ford was a storyteller, and stories are told through characters. In THE GRAPES OF WRATH, Ford gives every character all the room they need…..to tell their stories, to be who they are. Greg Toland shoots them in the shadows created by moonlight, candlelight, matchlight; in the harsh glare of the Western sun. And in profile along iconic horizons.

It’s hard not to be touched by the plight of the Joad family. Or stirred by Henry Fonda’s final words, vowing to dedicate his life to social change. 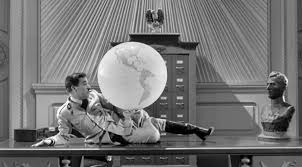 Charlie Chaplin resisted having the Little Tramp speak for an entire decade and two feature films. When he finally did, it was as natural as falling off a log. As it turned out, he was soft-spoken and understated. And he had effortlessly morphed into a Jewish barber. If the barber didn’t have much to say, it turned out that Chaplin did. Clouds of war were gathering in the world, and there was a tyrant leading the way. And with that little mustache if his, this egotistical demagogue had a rather striking resemblance to our aforementioned barber. All the better for Chaplin, in THE GREAT DICTATOR, to portray him as well.

In THE GREAT DICTATOR, the satire is pointed and unflinching. What may be surprising today, is also just how flat-out funny the film is. Chaplin may have added sound and stinging dialogue to his toolbox, but he did not abandon his signature trademark—–physical comedy. At the age of 50, Chaplin still choreographed and performed the comic set-pieces of the film. And they are just as acrobatic (and funny) as those from his golden days over 20 years earlier.

The striking and passionate final speech provides the perfect ending. Put it all together and you have another Chaplin classic, maybe a career testimony. It would be 7 years before Chaplin would make another film. 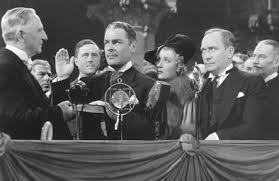 Not everybody in old Hollywood got to work their way up from screenwriter to writer-director. Only the good ones. And at Paramount in the 30’s, Preston Sturges was one of the best. After penning REMEMBER THE NIGHT for Mitchell Leisen, Sturges proved he was ready. Things moved fast in Hollywood in those days, and if you were ready things could move with you. Sturges answered the call. During the next 5 years, Sturges would write and direct half a dozen of the best, wittiest movies ever made. His flame burned brightly, but burnt out quickly (but that’s another story.)

THE GREAT McGINTY, Sturges’ debut as writer-director, hit the bulls-eye; a funny and cynical satire of American politics. The casting of Brian Donlevy is the first in a long line of brilliant moves in Sturges’ films. Other stars who would shine in unexpected roles would be Henry Fonda, Veronica Lake, and Joel McRae. 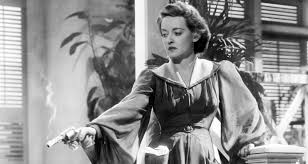 THE LETTER is possibly the best example of the perfect movie from Hollywood. Not because it is the best that Hollywood has produced, but rather that it’s the most perfect example of how the studio system (at its apex) could assemble the finest elements, the best talents at its disposal, and actually create lasting art in the process. Not only is that hard to do, it’s not even what the studios were consciously even trying to do. But magic sometimes occurs, and that is what we look to discover.

Adapted from a story by W. Somerset Maugham, and with a screenplay by Howard Koch, THE LETTER was an A-list project for Warner Brothers. The casting was perfect. Bette Davis, Herbert Marshall and the under-appreciated James Stephenson all shine. Then you have the signature score by Max Steiner and the evocative sets depicting a rubber plantation in Singapore. Bringing it all together and providing the best example of how the auteur theory commands a re-evaluation of Hollywood movies—–direction by William Wyler. Fresh from WUTHERING HEIGHTS (1939), Wyler simply applied his skill and taste to create one more in a long list of notable films that continue to stand the test of time.

There is a crime at the center of THE LETTER, and a courtroom trial. But it is the ramifications of both that provide the central interest. Maugham knew that when he wrote it and Wyler knew it, too. It’s the human drama here, and Gale Sondergard is given the chance to drive it home. Barely speaking a word, she is given the chance in the dead center of the film to provide the moral core. Unforgettable. 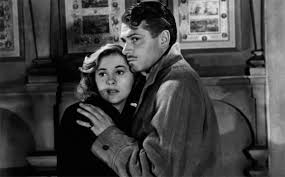 With hits like THE 39 STEPS (1935) and THE LADY VANISHES (1938), Alfred Hitchcock was the hot British director of the 30’s when producer David O. Selznick wooed him stateside. With GONE WITH THE WIND under his belt, Selznick turned to another literary adaptation, Daphne Du Maurier’s romantic mystery, REBECCA. It would earn him his second Best Picture Oscar in a row.

While not really being a “Hitchcock” picture as we would come to know one, (FOREIGN CORRESPONDENT the same year might be considered more in his wheelhouse), REBECCA is so well constructed that we have to give credit where credit is due. Sumptuously mounted and with great fidelity to the original novel, this is a Selznick production all the way. For his maiden voyage into Hollywood movie-making, Hitchcock still made a smashing debut. It established him as an elite director, allowing him a certain amount of control not shared by some of his fellow European emigres, like Fritz Lang. Hitchcock could (and did) flourish in the States, further developing a style which would result in further masterpieces.

REBECCA is in the essentials for all these reasons and more. The casting is perfect, from the brooding Laurence Olivier (fresh from WUTHERING HEIGHTS) to newcomer Joan Fontaine to the diabolical Mrs Danvers (Oscar-winning Judith Anderson) to the delightfully despicable George Sanders.

REBECCA is a classic, and a kind of testament to how Hollywood can work, even when there is no single dominant artistic vision to define the project. (Sorry, producers don’t count. They are assemblers and enablers, at best). 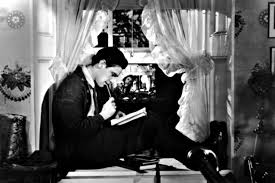 Thornton Wilder co-wrote the screenplay for this adaptation of his play, preserving the charm and the wit. That was the first good move. The second was to “open up” the very minimal original stage design (which was actually no set design at all). The job went to the brilliant William Cameron Menzies. The final and perhaps most enduring element of the film version of OUR TOWN is the classic music score by Aaron Copland. Copland was to rework the score into a suite that would play concert halls for decades. As an integral part of the film, I sometimes wonder if the film would be as highly regarded without it. As it is, it provides the perfect framework for Wilder’s gentle and thoughtful examination of small-town American life.

Like all great plays (and films), OUR TOWN aspires to be and achieves more than it at first appears. By the time of the climactic and stirring cemetery scene, it has clearly transcended being merely a slice of Americana.

Released by United Artists, the film rights have fallen into the public domain. As a result, most of the existing prints are less than pristine, giving the film an antiquated look beyond its years. Strangely enough, this almost works in its favor. Still, it would be nice to see it become the subject of a restoration project. Certainly many lesser films have been blessed with the same treatment.

Before graduating to the director’s chair, Preston Sturges wrote this gem, a perfect blend of humor and sentiment. Mitchell Leisen was an A-list director at Paramount, but barely known today. Like Michael Curtiz at Warner Brothers, Leisen could handle any genre. He could be counted on to deliver with intelligence and a real understanding for the material. He was the perfect director to showcase Sturges. (Leisen would perform the same function for Billy Wilder in the following year.)

Fred MacMurray is the D.A. and Barbara Stanwyck the shoplifter he is assigned to prosecute. Christmas recess delays the court proceedings, giving us plenty of time for some well-placed and well-played shenanigans. Romance is inevitable. Just four years later, these two would square off under entirely different circumstances, in DOUBLE INDEMNITY. 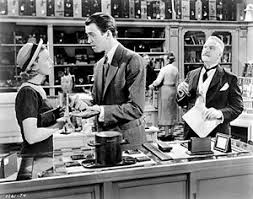 THE SHOP AROUND THE CORNER (Ernst Lubitsch)

(Spoiler alert!) James Stewart and Margaret Sullivan find romance, but not before some great dialogue and beautiful character development involving everyone in this little shop in Budapest. (Well, actually the back lot at M-G-M).

In some ways, you could call this a small film. Completely studio-bound, based on a play, little action. The fact that it doesn’t feel small or talky or claustrophobic is entirely due to Ernst Lubitsch. Working with frequent collaborator screenwriter Samson Raphaelson, Lubitsch once again works his magic.

Billy Wilder had a sign up in his office that read, “What would Lubitsch do?” What Lubitsch does in THE SHOP AROUND THE CORNER is assess every scene, every character for the essential humanity and simple truth that lies within. He always does this, but the reason this film has a special place is that it is so stripped-down, so intimate. (Would it have been half as good in another director’s hands?) The focus is on the characters, and you just love them. Like Wilder, Lubitsch’s characters are far from perfect. It is perhaps their imperfections that keep us engaged. I don’t know. I just know that the Lubitsch touch is in every frame. And that THE SHOP AROUND THE CORNER is an endearing and enduring classic. Nice to see that its stature is rising among those who care, especially since Joseph McBride’s recent book.