Wow, what a year!

Middle-class 50’s America gets rocked by the brutality of the criminal underworld. All under the monocled eye of Fritz Lang.

…and now to the Upper class, where a slight deception can lead to some very unfortunate circumstances. Max Ophuls, back in France again, approaches the end of his elegant career.

FROM HERE TO ETERNITY (Fred Zinneman)

Just your typical Hollywood blockbuster based on a best-selling novel, with an all-star cast and a top-notch director. A multi-Oscar winner, including for Frank Sinatra, who revitalized his entire career. 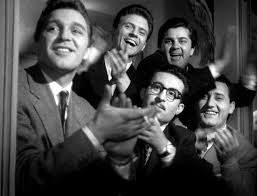 An early, lesser-seen masterwork from Fellini, before his flamboyant later period. A witty and insightful observation of human nature, as seen through the lives of a family of brothers.

Clark Gable recreates his role in RED DUST (1932), shot 21 years before. This time it’s in color, shot in Africa, and with star-power everywhere. Thanks to John Ford, it all works. Ava Gardner and Gene Kelly take the Jean Harlow and Mary Astor roles. Fireworks follow.

Nobody made movies with the toughness and raw humanity like Sam Fuller. The Quentin Tarantino of his day, he preferred action films and he could make any story crackle with energy. A true independent, he was still savvy enough to bounce off the studio system. Here, he gets Richard Widmark, under contract to Fox at the time. Hard to find a better fit for the Fuller hero; a heel with a conscience. And great opportunity for Fuller to show us the world as he sees it. 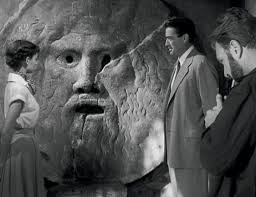 If William Wyler ever made a bad movie, I have yet to see it. With whatever material he was given, he could make it better. With good material, his films become exceptional. This one introduced Audrey Hepburn, in what became the textbook for romantic comedy. It’s also one of my wife’s favorite movies.

The first Western where you can actually feel the open spaces, smell the clean air of the prairie. A classic story of good vs. evil, almost revolutionary in its simplicity. Jack Palance’s bad guy is the baddest of the bad, where Alan Ladd’s blonde hair is about the only deviation that Stevens made from the novel. Superb in every way. 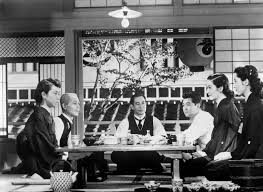 While Kurosawa became the famous one, right behind him came Ozu, one of the greatest directors of Japanese cinema. Less theatrical than most of his contemporaries, Ozu often focused on the everyday joys and conflicts within Japanese society. His cinematic language was universal. TOKYO STORY is widely acknowledged as his masterpiece, deriving its power through subtlety and an understanding of shared values.

The most lyrical of all Japanese directors was Mizoguchi, and the most romantic. His camera was fluid, as he shared with Ophuls the belief in the tracking shot as a moral statement. His stories were often heart-breaking, and this one is the most stunning. 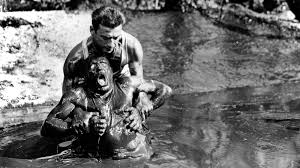 THE WAGES OF FEAR (Henri-Georges Clouzot)

For the first hour of this French classic, you might say to yourself, “Well, OK but where is this going?” Then, for the next hour, as you watch four men in two trucks carry explosive nitroglycerine down treacherous roads in the middle of the Amazon jungle, you realize you’ve been set up. It all comes together in this towering, risky, gutsy work of art. William Friedkin tried to remake it with SORCERER (1977). Clouzot told him it couldn’t be done. Years later, Friedkin met Clouzot and told him he had been right.

THE WILD ONE (Laszlo Benedek)

Between playing Marc Anthony in JULIUS CAESAR and winning an Oscar playing Terry Malloy in ON THE WATERFRONT, Marlon Brando decided to be “Johnny”, the leader of a California motorcycle gang. That portrayal led to one of the most iconic figures of the 1950’s, rivaling even Elvis Presley. Looking at THE WILD ONE today, it looks like pure camp, except that Brando plays it perfectly straight. And that is why it is a classic, instead of a nostalgic throwaway. Sure, you can wonder what his mindset was, but the important thing is that back then Brando was a dedicated actor. He transcends and transforms THE WILD ONE, rescuing it from the dust-heap of the weird, where it was probably destined to reside. It doesn’t hurt that we also have Lee Marvin being Lee Marvin, always welcome.