George Cukor really came into his own directing this wonderful ensemble cast which included John Barrymore, Jean Harlow, Wallace Beery, Lionel Barrymore, Marie Dressler and others. The story follows multiple threads, culminating in a dinner party which only begins as the end credits roll. The original play by George S. Kaufman and Edna Ferber is beautifully adapted by Herman J. Mankiewicz and Frances Marion. Full of memorable scenes.

After a couple of stagey early films, the Marx Brothers were unleashed with MONKEY BUSINESS (1931) and HORSE FEATHERS (1932), both written expressly for the screen. Their characters were already fully developed, and Groucho was leading the charge with his relentless onslaught of one-liners. Truly, these films move at a breath-taking velocity. Like many of the hapless innocents that the zany brothers encounter in the films, we viewers sometimes have to step aside to catch our breath from laughter.

DUCK SOUP was the first Marx Brothers film to be handled by a true comedy director and one the best, Leo McCarey. The results are combustible. Everybody’s in fine form and the timing is perfect. After DUCK SOUP, Paramount astonishingly decided not to renew the Marx Bros. contract. Irving Thalberg over at M-G-M saw a good thing and scooped them up. The subsequent success of A NIGHT AT THE OPERA in 1935 resurrected their careers, as Groucho has always acknowledged. But as good as A NIGHT AT THE OPERA and the follow-up A DAY AT THE RACES (1937) are, they also reveal Thalberg’s decision to make the Brothers’ films a little more family-friendly. Harpo in particular became less the troublesome pest, and more put-upon. The films had love stories injected into them, as the brothers became good guys helping to ensure a happy ending. Some of the anarchic spirit of the Marx Brothers was diminished. For my money, give me DUCK SOUP where Groucho’s caustic wit just narrowly escapes being mean-spirited, and where Edgar Kennedy’s lemonade cart is destroyed for no really good reason. 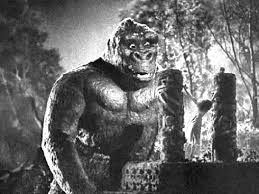 The one, the original, the classic. A labor of love for its makers, whose belief in stop-motion model animation was so great that they pulled off a miracle. KING KONG was so good (and so labor-intensive) that for two decades, few would even attempt it. Not until Ray Harryhausen and the creature features of the 50’s would we again be treated to such journeys into the fantastic.

Watching KING KONG today, the antiquity of the effects and the theatricality of the acting, date the film in the best of ways. KING KONG was an innovation, yet still a product of its time. The combination is magical to watch. It can be revisited again and again, and continue to delight. I know. I’ve done it.

A larger-than-life historical figure played by a titanic talent. Charles Laughton had been quite busy acting in films on both sides of the Atlantic, and this one finally made him a star. Shot in Britain, it established Alexander Korda’s LONDON FILMS as a major player in films around the world. Thoroughly entertaining, from beginning to end.

Greta Garbo was royalty in Hollywood, and for good reason. Already a star from her silent films, she made the transition to talkies without a hitch. This, despite her deep voice and Swedish accent. No doubt because she acted with her eyes, her body. John Gilbert, her co-star (as he had been in the silent days) did not fare so well. There was a growing sentiment that his voice was too high for a leading man, and he was soon to become box-office poison. This was nonsense, of course, as this film clearly attests. He had already proven himself in the under-rated and rarely seen THE PHANTOM OF PARIS in 1931. There is some evidence that Louis B. Mayer at M-G-M had a personal vendetta against Gilbert, as Gilbert himself claimed. And that Mayer was able to sabotage his career from this point on. Despite all this intrigue, Garbo and Gilbert are marvelous together in QUEEN CHRISTINA.

In the final scene, Garbo (as the exiled queen of Sweden), sails away, staring out from the bow of the ship, as her fate awaits. Legend has it that director Mamoulian instructed Garbo to empty her mind, to think of nothing, letting each viewer interpret this enigmatic look for themselves. I was fortunate enough to meet Mamoulian in the 80’s, before his death, and I asked him if that was true.  He graciously and appreciatively said that it was. 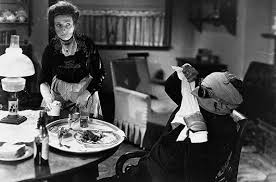 Maybe not as eternally memorable as its Franken-Dracu cousins at Universal, but this one still got the A-level treatment, and certainly has its moments. Kudos to director Whale for keeping integrity to H.G. Welles classic.