Nichols collaborated with writer/humorist/cartoonist Jules Feiffer for this funny/sad take on the slippery slope known as human sexuality. Nichols knows and loves actors and here he has Jack Nicholson, Art Garfunkle, Ann-Margret and Candice Bergen to flesh things out.

How do you follow 2001: A SPACE ODYSSEY? If you’re Stanley Kubrick, you make an iconic and visionary adaptation of Anthony Burgess’ caustic and cautionary tale of Britain in the not-so-distant future. Kubrick apparently put Malcolm McDowell through hell, but he also made him a star. An undisputed classic.

By 1971, the New Hollywood had arrived, and the new directors had grown up on the movies. The best of them had an intuitive sense of what might work on the screen. And they had a new group of actors to work with. Together, it was possible to revitalize genres. With THE FRENCH CONNECTION, William Friedkin and Gene Hackman (as “Popeye” Doyle) did just that. A commercial and artistic triumph

In Woody Allen’s STARDUST MEMORIES, super-intelligent aliens from outer space tell Allen that they like his movies, especially the older funny ones. Well, this is one of the older, funny ones. Like all the great movie comics before him (Marx Bros, Laurel & Hardy, W.C. Fields), Allen structured his early films with a wacky story framework, all the better to lay out a series of jokes; visual, verbal or both. Of course, Allen’s jokes entered into areas his predecessors had never visited —- existential angst, political savvy, masturbation. With BANANAS, Allen is at his best, straddling the traditions of comedy with a modern sensibility. And more importantly, it could just be his funniest movie ever. 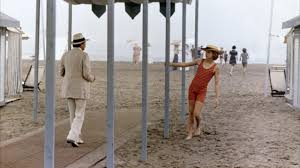 No jokes here. Visconti treats Thomas Mann’s novel like one of the operas that Visconti has so notably directed. Dirk Bogarde’s performance is heart-breaking as Visconti uses nearly the entire final movement of Mahler’s 5th symphony for his farewell. It is one of the most stunning finales in the history of cinema. 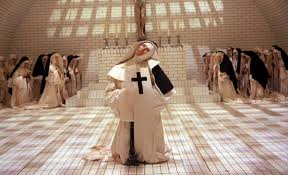 Ken Russell was definitely on a roll when he made this blistering attack on hypocrisy, political corruption and the church. Russell wrote the screenplay based on Aldous Huxley’s “The Devils of Loudon” a true-life account of a 17th century event. Superb performances by all, including the leads Oliver Reed and Vanessa Redgrave. Striking sets by a young Derek Jarman. A gutsy, incendiary firework by an artist at his peak.

THE DEVILS was highly controversial at its release, particularly in the UK. The story of its making and the aftermath is captured in the excellent documentary HELL ON EARTH: THE DESECRATION AND RESURRECTION OF “THE DEVILS”.

In 1966, Monte Hellman directed two “existential” westerns called THE SHOOTING and RIDE IN THE WHIRLWIND, both featuring a young Jack Nicholson. When Jack got noticed in FIVE EASY PIECES, so did the westerns, and they helped Hellman get financing for TWO-LANE BLACKTOP, a kind of minimalist masterpiece. Two young guys hit the road going west on Route 66, doing what they do to survive: race their souped-up ’55 Chevy against anybody they can find. They pick up a girl hitchhiking and meet up with a guy in a GTO who agrees to a cross-country race, winner take all. That’s the gist of it. To add to the uniqueness of the film, Hellman cast two non-actors as simply, “The Driver” and “The Mechanic”.  They were not unknown, however, as they were James Taylor who was just hitting it big with his second album, and Dennis Wilson, drummer with THE BEACH BOYS. Both of the leads accomplish what every actor tries to do—-to not act. Warren Oates as “GTO” has most of the lines, and he makes the most of them as he invents a new backstory for every hitchhiker he picks up. The result is a film where nothing and everything happens, depending on how you see it.

TWO-LANE BLACKTOP looks more like an Antonioni film than anything out of an American studio. In fact, Lew Wasserman of Universal hated the film and refused to promote it. Naturally, it did better in Europe than the US. Today, it looks better than ever.