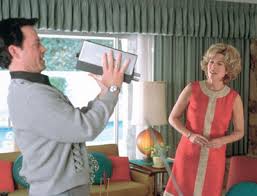 The true story of Bob Crane (TV’s Hogan of “Hogan’s Heroes) and his sordid demise is perfect for Paul Schrader, dealing as it does with the perils of temptation and the wages of lust. Greg Kinnear is perfect as Crane, while Willem Dafoe adds yet another memorable character to his impressive resume.

There’s an entrancing darkness to this first entry in the Bourne series that I find quite appealing. It suits the story nicely, and the setting of eastern Europe in the winter sets  the tone for dirty deeds done in dark places. The action scenes certainly deliver and the intrigue harkens back to the early days of the cold war spy genre. John Le Carre should approve.

THE KID STAYS IN THE PICTURE (Brett Morgan & Nanette Burstein)

Somebody had the bright idea of having Hollywood legend Robert Evans narrate and guide us through the documentary on his own life. The presumed lack of objectivity is no problem here, as Evans’ chronicle from minor actor to wunderkind producer to Paramount studio head is told with surprising candor and wit. The journey is fascinating, as we travel through ROSEMARY”S BABY, LOVE STORY, THE GODFATHER, CHINATOWN and more. Evans’ story is larger than life, just like the man. It also happens to be true.

Philip K. Dick’s sci-fi novels were supposed to be unfilmable, but after BLADE RUNNER, the curse was broken. Twenty years later we got MINORITY REPORT. Steven Spielberg deserves a lot of credit for guiding the project, and keeping it from becoming a hot mess. More than that, his now indisputable “maturity” as a director and his innate sense of storytelling elevates MINORITY REPORT to a level above the norm. As a lover of the futuristic sci-fi genre, I salute you, Steven.

A huge critical and popular success for Polanski and an Oscar-winner for Adrien Brody, as well. The story of survival in Nazi-invaded Warsaw has “importance” written all over it, but it is Polanski’s personal investment and his unique take on human nature that keeps THE PIANIST from becoming just a well-meaning MASTERPIECE THEATRE enterprise. Engaging throughout.

Soderbergh’s remake of the Tarkovsky classic of thirty years before is less of a think-piece, but every bit as emotionally involving. Once again, a psychologist is sent to a space station where the crew is experiencing unusual, even bizarre mental distress. The reason and the results are similar to the original film. In these cold and metallic surroundings, the most human of conditions are explored.

While shooting SOLARIS, George Clooney (playing the psychologist) was also in the midst of editing his own directorial debut, CONFESSIONS OF A DANGEROUS MIND. By his own admission, the long hours were taking their toll. His weariness is evident on the screen, quite perfect for the role he was performing. It only led gravitas to his predicament and to the finale, which I have to confess………gets me every time. SOLARIS  may push my buttons in a very subjective way, but I think my critical objectivity allows me to recommend it just the same.