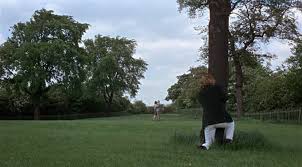 When was the last time that a European director with an uncompromising vision made a film that followed his artistic and intellectual explorations (obsessions?) and had international success? Maybe it helps to shoot the film in swinging London of the 60’s, feature the Yardbirds in a key scene, make it with English dialogue and have it coincidentally contain a pretty good mystery in its scenario. Oh yes, and have two young model/actresses get totally nude and cavort in a mini-orgy with the protagonist (the famous “purple paper scene”), at a time when nudity was far from commonplace in films.

Everything comes together in this timeless classic. Antonioni uses silence and location masterfully to create and seduce. With Antonioni, you may sometimes wonder, “Where’s the action?”. Then days, weeks, maybe years later it hits you, on a second or third viewing. And there’s nothing there to ask.

If this isn’t the ultimate Godard film of the 60’s (and I would make a case that it is), it is certainly the most entertaining. The young of Paris is the focus here, but Godard has a lot to say about a lot of things……as usual. Jean-Pierre Leaud “stars”, but it is the streets and cafes of contemporary (c1966) Paris that are the real stars.

A pretty audacious debut for a New York-based standup comic (with Elaine May) who decided to become a Hollywood movie director. He gets Richard Burton and Elizabeth Taylor, already famous battlers in marriage, to play the quarreling George and Martha in Edward Albee’s ground-breaking play for the screen. The results? Explosive.

Truffaut did not have an easy time bringing Ray Bradbury’s novel to the screen. In his only English-language film, he struggled with a stodgy British crew and an intransigent star (Oskar Werner). Still, it was a labor of love and for the most part, a successful one. It was Truffaut’s homage to the written word. His love and respect for it is obvious. FAHRENHEIT 451 also contains yet another great score by Bernard Herrmann, featuring the beautiful finale to accompany the film’s haunting ending.

THE GOOD, THE BAD AND THE UGLY (Sergio Leone)

Not really essential in my book (I’m sure Quentin Tarantino would disagree), but mention must surely be made of this, the ultimate spaghetti western, and the two that preceded it, A FISTFUL OF DOLLARS and FOR A FEW DOLLARS MORE. Copied and emulated by dozens of films and their makers, this one provided template for many still to come.

Three years before Woody Allen’s first feature directing effort, he created this ridiculously funny spoof. In the now time-honored tradition, Allen took a Japanese widescreen color James Bond-type action film, stripped the soundtrack and created his own. The clearly Asian secret agent becomes instead, Phil Moskowitz. And the secret microfilm that everybody seems to want contains a killer recipe for egg salad……and that’s just for starters.