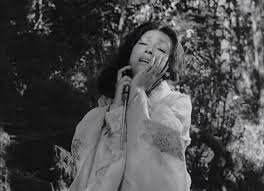 The first great film from Japan. Still great today. A riveting exploration of truth and human nature. Introduced Kurosawa and Toshiro Mifune to the world.

The story-line for SUNSET BOULEVARD (down-on-his-luck screenwriter hooks up with aging, reclusive former star with tragic results) couldn’t have been hard to sell to the studio in high-concept Hollywood. Especially since it came from Billy Wilder, who already had a solid track record at Paramount, with big hits and Oscars behind him. But it was Wilder and co-screenwriter Charles Brackett who took the concept and developed it into one of the greatest films of all time.

The brilliance begins with the decision to have the narrator/protagonist of the film (William Holden) floating face-down in a swimming pool in the opening scene. The sense of doom that naturally follows puts this film squarely in the film noir category. The crisp dialogue and unflinching focus on time and place is pure Wilder. The inspired (but not original choice) hiring of Gloria Swanson as the star of the bygone silent era is pure movie magic.

First, you have great story-telling. Then there’s the capturing of the iconic Los Angeles of the time (just as Wilder had done in 1944 for DOUBLE INDEMNITY). A potent combo. The casting of Erich Von Stroheim and Buster Keaton just adds to the mix. And there’s that last line, the kind that Wilder loves to deliver. “All right, Mr. DeMille. I’m ready for my close-up” is one of cinema’s greatest.

ALL ABOUT EVE (Joseph L. Mankiewicz)

Joseph L. Mankiewicz was on a roll (and many would say peaked) with this mega-Oscar winner, a stinging and insightful foray into the world of the theater. It is still considered one of the best written movies ever. Any actor who read the script wanted to say those lines. Writer-director Mankiewicz had control, but originally had glitches in the casting. Claudette Colbert was set to play the lead, but an injury prevented it. The clouds parted and the Gods of Cinema intervened. Enter Bette Davis. As notable as all the other elements in this film are, it’s hard to imagine ALL ABOUT EVE without her. This is not the only movie on this list where it’s the acting that tips the scales to greatness. Let’s give credit where credit is due. Bette Davis is the engine that propels this vehicle and helps everyone else shine.

Director Joseph H. Lewis is by no means a household name, even in cinematic circles. But there’s no denying that his GUN CRAZY holds an honorable place in the temple of American crime films. Shot on a low budget, it delivers just the way movies should. Characters you care about and action that compels you to watch things unfold.

HOUSE BY THE RIVER (Fritz Lang)

Another gem made on a relatively low budget, it almost looks like a long TV episode of the day. But it’s the perfect example of how a great director can take a small project and make something personal and memorable.

PANIC IN THE STREETS (Elia Kazan)

Natural sound. Natural lighting. Authentic locations. Neo-realism meets the Method. Rather like a test run for ON THE WATERFRONT four years later, as Elia Kazan skillfully guides his camera and his actors through the mean streets and back alleys of New Orleans. The leads (Richard Widmark and Paul Douglas) are just fine, but it is the supporting cast, like the menacing Jack Palance (billed as “Walter” Jack Palance) and the revelatory Zero Mostel that all but steal the show.

The plot about an attempt to prevent an outbreak of pneumonic plague is intriguing. Even if it sometimes forces the histrionics into the realm of the ludicrous. Kazan clearly encourages a bit of improv now and then, making this an “actor’s movie” for better or worse. You make the call.