1944 – The year when darkness crept into the American cinema and “film noir” became an established entity. Crime, anxiety, paranoia, cruel destiny. These are the things that classics are made of. 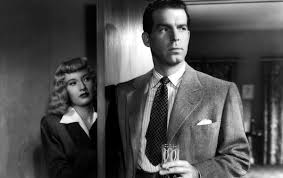 Even though the Oscars for 1944 went to the feel-good GOING MY WAY, it is DOUBLE INDEMNITY that has proven to be the enduring masterpiece. Based on the novel by James M. Cain, the screenplay collaboration (and clash) between director Wilder and Raymond Chandler is nearly as legendary as the film itself. Chandler, the literary creator of the iconic private eye Phillip Marlowe, was no stranger to the seamy side of life. But he was the gentlemanly type, and working in close quarters in an office at Paramount with the sometimes crude, cigar-smoking Austrian Wilder, drove both of them nearly crazy. Somehow, pure gold came out of this combustion and the rest is history.

Barbara Stanwyck and Fred MacMurray had worked before, but never with such electricity. The crackling dialogue between the femme fatale and her smitten, complicit insurance salesman is some of the best ever written. Both of them go down that dark path that just can’t end well. It never does. Los Angeles is the milieu, and the town itself is a player in the grand drama. Bowling alleys on Western Avenue, markets on Melrose, even the Hollywood Bowl itself, provide the backdrop for this classic tale of crime and desire.

What do you do if you’re a cop and you get a little too interested in a murder victim? You just try to keep your distance. What if she turns out not to be dead after all? Well, that’s where things get complicated. LAURA is the film where Gene Tierney became a star and Dana Andrews plays the cop who becomes entranced. (May I confess to sharing his predicament?). When Tierney’s death turns out to be presumed prematurely, that’s where the intrigue just begins. Director Preminger would go on to do all kinds of big-budget high-concept films, but none of them would display the subtlety and shades of grey that this classic has.

THE WOMAN IN THE WINDOW (Fritz Lang)

Sometimes a chance meeting can lead to momentous, tragic events. How much can we do to influence our futures? Well, if you’re in a Fritz Lang film, there’s not much wiggle room. Destiny holds a heavy hand, even when the circumstances seem out of character. Poor Edward G. Robinson has his hands full with Joan Bennett. Are they both victims of fate?

There really aren’t that many ghost stories in the movies, and far fewer good ones. This one is among the best. I loved it when I was a kid, and when I saw it again with my eight year old daughter thirty years later, she had the same reaction. It’s creepy but classy. Just what is that at the top of the stairs?