To see this epic western in all its restored glory, it becomes necessary (as I did) to re-evaluate all previous conceptions about the Western film, the early talkies, and the careers of both John Wayne and Raoul Walsh.

Originally shot in 70mm, the film did only moderate business at the box office, primarily because of the limited number of theaters that could handle the format. Raoul Walsh had already become a name for himself with silent films. In fact the title card reads “Raoul Walsh’s THE BIG TRAIL”. To play the lead, Walsh’s pal John Ford recommended a young guy who had been doing extra and stage work for him, named John Wayne. “This guy walks like he’s going somewhere”. Walsh took a chance, and watching the 23-yr old Wayne in this film is a revelation. He has a confidence and youthful swagger that he would never quite match again.

THE BIG TRAIL is a stunning achievement. Walsh led his cast and crew,  horses and humans in covered wagons over endless terrain in duplicating the trek of the original pioneers of the Oregon Trail. The scene of the wagons being led down the cliffs to the riverbed below is alone worth the price of admission. The acting is admittedly and expectantly hoaky at times, but the pictorial splendor and the encompassing story of revenge makes this film THE REVENANT of its day.

The careers of both Walsh and Wayne went into a kind of eclipse after THE BIG TRAIL. Wayne toiled for 9 years in minor parts and B-Westerns until Ford put him in STAGECOACH. Walsh never quite achieved the A-list status again until perhaps THE ROARING TWENTIES (1939).

For years it was the accepted belief (even among cineastes) that the glory of silent films and co-incidentally the height of F.W. Murnau’s career, peaked with his masterpiece SUNRISE (1928). Well, they didn’t see CITY GIRL. Defying the trend, Murnau eschewed the technique of the Talkies, and imbued his film with a predominantly visual approach with a simple storyline to match. There is more lyrical beauty in this film than in a dozen of its kind, whether shot in a squalid tenement room with the elevated railway racing by outside or in an open wheat field on a blustery day.

CITY GIRL was apparently a big influence on Terence Malick and his DAYS OF HEAVEN. No wonder. 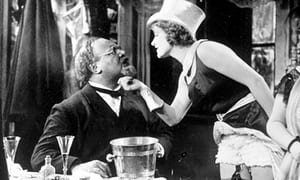 THE BLUE ANGEL and MOROCCO (both Josef Von Sternberg)

So director Von Sternberg goes to Germany and discovers a young actress and shoots an all-time classic (in both German and English), with the great Emil Jannings and his new ingenue. He then returns to Hollywood with his newly-created star and makes the first of six deliriously wonderful masterpieces. Not a bad year for one of the great romantic directors of the early sound era. With Marlene Dietrich and a different leading man for every film, Von Sternberg embarked on what he would call “a relentless excursion into style”.

When Howard Hughes decided to get into movie-making, he did it in a big way. He sunk a fortune into it, but the aviator kept the story close to what he knew about — flying. and the aerial scenes are maybe the best thing about HELL’S ANGELS. And while the rest of it may be a mess, it’s a fascinating one.

Made independently, it started out as a silent in 1927. Production dragged on so long that sound came along and forced a whole new re-boot, including the replacement of the leading lady Greta Nisson, whose German accent was wholly inappropriate. Much of the silent footage of the aerial combat scenes remain. The resulting mishmash gives the film a start/stop awkwardness. There’s a full-color sequence for no particularly good reason, some stultifyingly corny dialogue and a scenario of male bonding that just doesn’t sell. Still, there’s the fortuitous hiring of 18-yr old Jean Harlow, who more than holds her own. Despite the negative judgement of some of the critics of the day, she clearly shows a natural sass that could and would make her a star. Then you have some blue-tinted night scenes where a German zeppelin is being pursued through the clouds by our heroic fighter pilots. German soldiers dutifully jump to their deaths below in order for the zeppelin to gain altitude. Pretty wild stuff.

There is a decidedly independent spirit to HELL’S ANGELS that is quite endearing. Hughes was definitely an outsider to Hollywood, as he was in life. It should be noted that James Whale was hired to direct the sound scenes on the strength of the stage success of the WWI drama, JOURNEY’S END in Britain. Whale shot much of the footage that is still included. But production dragged on so long that Whale was able to go back to Britain to do the film version of JOURNEY’S END before HELL’S ANGELS was completed. The final credits have Hughes as the sole director. (Still, Whale was given an authentic German Lugar  pistol for his efforts). Whale’s first big screen credit in the States would have to wait for WATERLOO BRIDGE, and of course soon after, FRANKENSTEIN.

While all of this was going on, Howard Hawks was preparing and releasing THE DAWN PATROL. Both films had WWI aerial fighter pilots battling the Germans and destroying ammunition dumps. THE DAWN PATROL scored the first success at the box-office. In retrospect it suffers from the same over-wrought theatrical histrionics as HELL’S ANGELS. But it more than holds its own with its authentic aerial footage and the structure of the screenplay. (In fact, despite a lawsuit from Hughes for plagiarism, THE DAWN PATROL went on to win an Oscar for Best Original Story.) Perhaps more importantly, we see an early example of how Hawks could, even early in his career, effectively infuse his own artistic personality into a film and make it all the better. With films like this, the auteur theory would be born. THE DAWN PATROL simply lingers in the mind, long after the other debates of its merits are over.