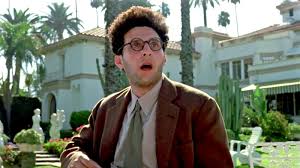 Among the many pleasures of a Cohen Brothers film is how they can dip into traditional Hollywood genres and still come out looking wholly original. This is what can happen when you get a crop of film-makers who love movies and have seen a ton of them…..and of course, who have loads of talent. Call them the post-Spielberg generation. The Cohens, the Tarantinos, the Paul Thomas Andersons, etc.

In this one, our poor hero Barton Fink is big stuff on the New York stage of the late 1930’s, where his leftist, “Proletariat” play raises a ruckus……kind of like Clifford Odets and the East Coast Commie-loving artists that would later run into trouble with HUAC. Next stop Hollywood, that great devourer of even the smallest of talents, always eager to feed the Dream Machine. Fink arrives in Tinseltown wholly unprepared for the crassness and surrealism that follows. He never quite recovers, but ultimately finds a kind of transcendence…. or does he?

BARTON FINK is a wacky, wise winner full of quirky turns and memorable performances from John Torturro, John Goodman, Steve Buscemi and Oscar-winner Michael Lerner who plays all of the heads of the Hollywood studios rolled into one.

If JFK wasn’t so well made, I could dismiss it as claptrap and eliminate it from consideration from this collection, or at least from the Essentials. But Oliver Stone at his best is a master of cinema, whose brilliance commands attention. He is also a master manipulator of truth, and therein lies the problem. As a political provocateur, Stone will take us anywhere he wants to go. As an artist, he understands his right to massage the facts in order to arrive at a greater truth. He can even indulge in partial fantasy, as he did in the stinging speculative satire, W. Sometimes he ventures into indisputable territory as in SALVADOR or in his Vietnam trilogy.

For JFK, the greater truth was in exposing and dramatizing the overwhelming fact that John F. Kennedy was not killed from a single bullet from Lee Harvey Oswald on that fateful day in Dallas in November of 1963. The problem with the film JFK, is in hanging this exposition and revelation on the character of real-life New Orleans D.A. Jim Garrison, played by Kevin Costner. While it’s true that Garrison was onto something in trying to get to the truth (that the U.S. government had decided to bury any thorough inquiry into the assassination), Garrison was far less of a hero than the film proclaims. He was seriously off-track in his persecution of Clay Shaw (played by Tommy Lee Jones), and ruined Shaw’s life as a result. There is no hint of this fact in the film.

Am I quibbling? Does art always trump reality? Doesn’t every biopic exaggerate for effect? I guess my comments could be seen as a kind of disclaimer. To make a compelling movie about a real-life event, you’ve got to have a compelling character to tell the story. And look at how many biopics have fudged on the facts, just to keep the story interesting! When you’re making movies to make political points or expose social injustices, your job just gets tougher. Oliver Stone is the only film-maker I know who seems to relish the job, and to mostly succeed in the process. He has had one hand on the pulse of world events while keeping one foot in the entertainment industry. No easy task.

It’s good to have film-makers like Stone and Von Trier and De Palma and Tarantino who push the boundaries and force us to question our own place in the judgement game. See JFK and see where you stand.

SILENCE OF THE LAMBS (Jonathan Demme)

Only an actor with talent to spare like Anthony Hopkins could nail a career-defining role like that of Hannibal Lecter and not worry about being type-cast.  The image and antics of Mr. Lecter have been indelibly etched into movie-goers minds worldwide, yet for Mr. Hopkins it was just one more in a gallery of memorable characters.

Director Demme lucked out with Hopkins, but he’d been proving himself quite adept with his choice of actors for some time, most notably with SOMETHING WILD (1986) and MARRIED TO THE MOB (1988). As an actor, working with Demme must have been invigorating. Jodie Foster was up to the challenge in SILENCE, and holds her own, just as her character Clarice must, lest she be overwhelmed by the forces around her.

Rather like Louis Malle, Demme’s films are all over the place; dramas, comedies documentaries, musicals. They may lack consistent themes and a singular vision, but (also like Malle’s), they are always marked by intelligence. Demme makes movies that interest him, and with SILENCE OF THE LAMBS, he broke plenty of rules. He was rewarded with universal acclaim.

Even if you’re not a big Albert Brooks fan, you have to admit that at least his concepts are inventive (LOST IN AMERICA, THE MUSE, etc). And the idea for a film where when you die you go to a kind of halfway-house resort where you will have your life (and your past lives) reviewed to determine where you’ll go next is certainly an inspired one, with plenty of comedic opportunities. Even if DEFENDING YOUR LIFE isn’t Brooks funniest movie, there are still drop-dead hilarious moments. And in between “jokes”, I would still find myself chuckling at the very concept, as if I had just remembered how goofy it was. 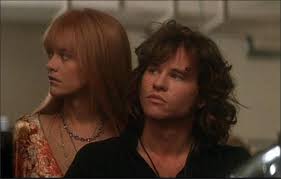 Biopics can be a tricky business, and movies about rock and roll bands even more so.  There’s all the approval that the film-maker has to get from all the living and the dead (or rather, their estate.) Then, the bigger the fan base the more guaranteed that a huge chunk of the audience will hate the film. It’s a dauntless task. It better be a labor of love just to see the thing through. For Oliver Stone and THE DOORS, it was exactly that.

Hearing The Doors’ first album while serving in Vietnam had a profound effect on the young Stone. When Stone began writing screenplays, he sent his first, “Break,” (later to become PLATOON) to Jim Morrison. By 1991, Stone’s understanding of the creative impulses and the destructive forces pulling at Morrison, positioned him as the right man for the job of putting the story of The Doors on film. And Stone is a commando, a veteran of the directing wars, plowing through a list of producers and their demands, as well as all the budget and location headaches that come with making a film about a real time and place. (Until ONCE UPON A TIME IN HOLLYWOOD, THE DOORS has by far the best depiction of L.A. in the late Sixties, and especially of the music culture of the Sunset Strip.)

And then there is Val Kilmer. Despite being considerably larger than the man himself, Kilmer completely embodies Jim Morrison. He walks, talks and even sings like Morrison. Kilmer has simply never been better on screen. And with all the filming technology that Stone had at his disposal, from steadi-cams to mobile cranes, the concert scenes are electrifying.

Even before the adaptation of his novel, “THE PLAYER” hit the screen as directed by Robert Altman (see 1991), Michael Tolkin got the chance to direct this relatively unknown gem. Here Tolkin takes the cherished orthodox Christian concept of “the rapture” and turns it on its head. Even if you’re familiar with the belief (that when the apocalypse comes, God will lift all the “good” people up to heaven), in THE RAPTURE you’re never quite sure where the movie is taking you until the end. Tolkin skillfully maintains a certain amount of suspense while keeping the story unfolding.

Mimi Rogers and David Duchovny (pre- X Files), are a couple exploring their own beliefs, while rather life-changing circumstances occur around them. As the viewer, we can’t help but question our own attitudes and viewpoints as if Tolkin was asking us, “What would you do if….?”